For several billion years, microorganisms and the genes they carry have mainly been moved by physical forces such as air and water currents. These forces generated biogeographic patterns for microorganisms that are similar to those of animals and plants.

In a new study in the journal Science authors note that humans and animals now move on an unprecedented scale, and this movement actively transports and enriches a specific subset of microorganisms.

“Humans in the past 100 years have changed these natural dynamics by transporting large numbers of cells to new locations through waste disposal, tourism, and global transport and by modifying selection pressures at those locations. As a consequence, we are substantially altering microbial biogeography”, said Prof. Josep Peñuelas from CREAF-CSIC Barcelona.

Wastewater carries high densities of microorganisms and their cargo genes. It should be noted that, globally, some 359,000 km2 of croplands depend on irrigation with urban wastewater, 80% of which undergoes little or no treatment. Therefore, the use of wastewater or manure in agriculture contaminates fruits, vegetables, and farm animals which in turn are distributed globally. Wastewater also contains pollutants with biological effects (as metals, antibiotics or disinfectants). These compounds stimulate bacterial stress response systems that increase mutation rates which, in turn, confer adaptive advantages on at least a subset of cells arriving at a new location.

For a sense of the importance of this adaptive advantage, authors consider the clinical class 1 integron. This DNA element acquires foreign genes from the environment and has played a central role in spreading antibiotic resistance among bacterial pathogens. DNA sequencing data show that it had the origin in a single cell, in the early 20th century. Millions to billions of copies of this element now exists in every gram of feces from human and domestic animals. This remarkable increase in its abundance and distribution has been driven by antibiotic selection, increases in human population, and dissemination via global transport.

The role of human and material movement

This study points out that humans and agricultural animals now comprise 35 times as much biomass as wild terrestrial mammals. The bacteria shed in feces, therefore, mainly represent the gut microbiota of humans and agricultural animals (cattle, sheep, goats, pigs, and chickens) and they have vastly increased in both abundance and distribution, particularly in the last century. “Efficiency of dispersal is enhanced by the 1.2 billion international tourist movements per year, as evidenced by the rapid spread of bacterial clones and antibiotic resistance genes between continents”, emphasizes Prof. Micahel Gillings from Macquarie University, Sydney .

The study also points out that humans additionally promote dispersal of microbial cells via mass movement of materials. In this regard it should be noted that human activities now move more soil, sand, and rock than all natural processes combined. As an example, natural fluvial erosion is 21 gigatons (Gt) per year, much lower than the75 Gt per year eroded by agriculture. “This erosion transports very large numbers of bacteria, given that soil can contain more than a billion microbial cells per gram. Movements on this scale have consequences for human health, agriculture, and ecosystem functions, such as increasing the spread of human pathogens and threatening sustainable food productivity”, said Prof. Yong-Guan Zhu from Chinese Academy of Science.

According to this study, changes in the distribution and abundance of microorganisms, and the resultant changes in microbial ecosystems will affect biogeochemical cycles driven by microbial activity. “Knowledge of the connections between microbial biodiversity and landscape-scale biogeochemical processes, as well as below-ground ecosystems, will be essential to predict the magnitude and direction of these changes”, said Prof. Josep Peñuelas from CREAF-CSIC Barcelona.

Linking the rapidly expanding databases generated by environmental genomics with biogeochemical models could reveal changes in nutrient cycles. “This fusion of genomics and Earth system science is a first step to understanding how the biochemical functions of microorganisms could be altered, temporally and spatially, by global change”, said Prof. Yong-Guan Zhu from Chinese Academy of Science.

There is a recent growing trend for monitoring the environmental dissemination of genes, particularly those that confer phenotypes of direct relevance to human and animal health. In this sense, Prof. Josep Peñuelas points to the high importance of understanding how human activities cause systematic changes in ecosystems and highlight the priority of investigating microbial invasions, microbial extinctions, and perturbations to microbial ecosystems.

The Jury for the Nature Mentoring Awards for Mentoring in Science 2017 has met in CREAF (Bellaterra, Catalonia, Spain) on Spetember 15th, 2017.

The jury, headed by Prof. Josep Penuelas,  was made up for the following experts: 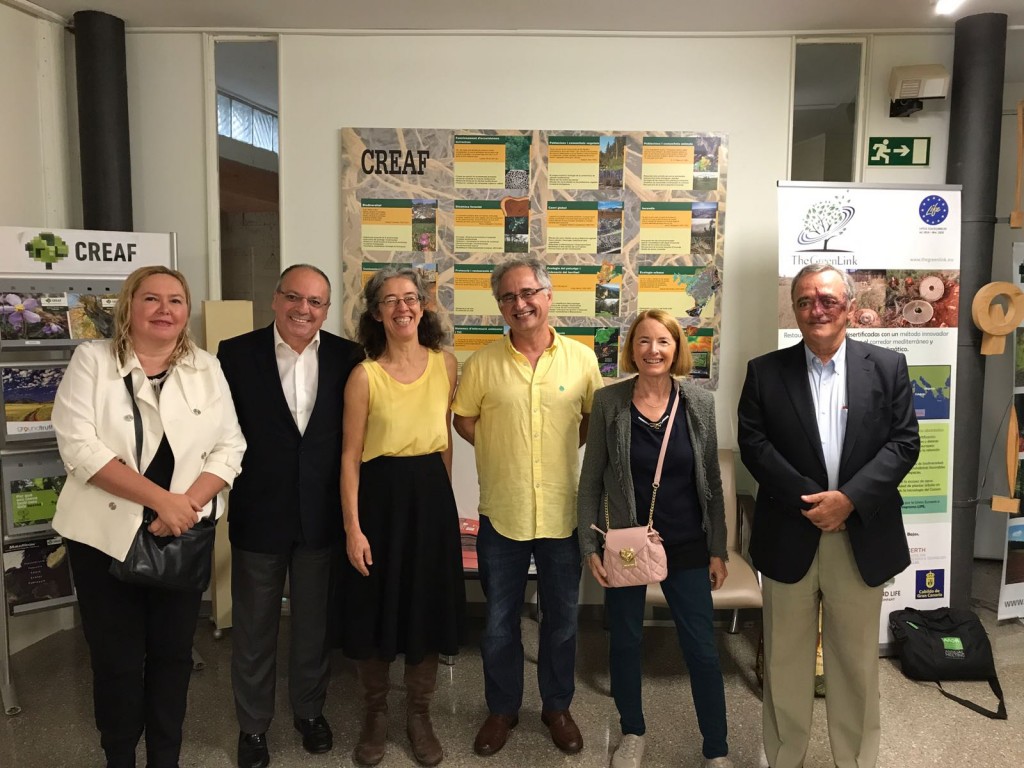 Natural ecosystems currently remove on average each year an amount of carbon dioxide equivalent to about one third of human-caused carbon dioxide (CO2) emissions from fossil fuel burning and cement production. There are numerous evidences which show that the efficiency of natural land ecosystems to absorb the increasing fossil fuel and cement emissions does not keep their path.

In a new study in the journal Nature Ecology and Evolution authors hypothesize that the progressive long term weakening of the natural land sink relative to fossil fuel CO2 emissions marks the beginning of a transition from a vegetation fertilization-dominated period to a period dominated by nutrient and climate constraints on plant growth, and larger climate change impacts (e.g., heatwaves).

There are many unknowns in the timing of this transition, so in light of the recent Paris COP21 agreement, a better understanding of climate change impacts on carbon stocks remains paramount to understand the level of climate mitigation required to achieve agreed temperature goals, indicates Prof Josep Peñuelas from CREAF-CSIC Barcelona.

Human activities result in increasing atmospheric concentrations of CO2, N inputs to ecosystems and temperature. This leads to enhanced metabolism of organism and lengthening the growing seasons. Plants can consequently grow more. The magnitude of carbon sinks and their duration depend both on the rate of increase of carbon inputs and on the residence time of the carbon being taken up by ecosystems explain Drs Shilong Piao from Academy of Sciences in Pekin and Jordi Sardans from CREAF in Barcelona.

The anthropogenic increases in CO2 and atmospheric nitrogen deposition are not matched by a similar increase in the inputs of other key nutrients such as phosphorus (P) and/or potassium (K). Current evidence suggests an overall shortage of P which will act as a limiting factor to meet the increasing demand for plant growth. “A better understanding of the factors that regulate exchanges between pools of “available” and “unavailable” soil P is critically needed”, said Prof. Ivan Janssens from University of Antwerp.

The higher nocturnal temperatures enhance night respiration, Prof. Josep Canadell pointed out. Moreover, severe regional heatwaves are also likely to become more frequent in a changing climate, and their negative impact on terrestrial carbon sequestration may thus also become important. “For example, the 2003 heatwave decreased European gross primary productivity by 30%, which resulted in a strong anomalous net source of carbon dioxide to the atmosphere; this effect is the equivalent of reversing four years of net ecosystem carbon sequestration in the European continent”, said Prof. Philippe Ciais from LSCE Paris.

In recent decades large-scale droughts have reduced seasonal NPP in the Southern and Northern hemispheres and weakened the terrestrial carbon sink. However, as Drs Marcos Fernandez-Martinez and Jofre Carnicer from CREAF-CSIC Barcelona point out, there is an inherent difficulty in quantifying the response of NPP to drought because it depends on the timing of drought during the growing season, and on ecosystem properties of resistance to drought.

Furthermore, it should be taken into account that most land use changes, fires, and harvests, which are expected to increase in the future reduce residence times, thereby reducing the sink capacity of the land biosphere as noticed by Prof Michael Obersteiner from IIASA Vienna.

Due to the above, the potential saturation or slower increase of the sink capacity of terrestrial ecosystems, or even its transition into a source of CO2, could be expected. Moreover, for Prof. Josep Peñuelas from CREAF-CSIC Barcelona, current climate models do not necessarily well represent extreme events due to coarse resolution (eg. extreme precipitation, wind storms and tropical cyclones) or to insufficiently constrained soil-atmosphere interactions. At this point, authors point out that these models could improve its prediction capacity through the addition of factors outlined above. “Such improved models could then help understanding the responses to different levels of global warming (especially in the range 1.5-3°C according to the Paris agreement and current intended policies)”, said Prof. Josep Peñuelas from CREAF-CSIC Barcelona.

Shift from a fertilization to a warming period

This study presents multiple evidences suggesting limits to the buffering capacity of the biosphere. Thus, Prof. Josep Peñuelas indicates that a slowdown of the CO2 and N fertilization effects on ecosystem carbon sequestration and the rapid emergence of negative ecosystem impacts from global climate change might drive a shift from an Anthropocene period dominated by fertilization to another period characterized by saturated fertilization and strong climate change.

For Prof. Peñuelas, although the climate has not yet changed dramatically in the Anthropocene, the coming decades will undoubtedly be different. Prof. Vautard from LSCE Paris explains that “A warming of 2 °C would slightly increase the frequency of 2003-like heatwaves in Northern France, but a warming of 3 °C would instead produce very different conditions, with one summer like that of 2003 occurring every three or four years, which would therefore affect the forests carbon sink in Europe much more than in the past”.

There is also the possibility of low probability but high impact phenomena which would lead to rapid positive feedbacks to the climate system (e.g. massive dieback of Amazon rainforest because of reduced rainfall or a dramatic temperature drop in the North Atlantic because of the collapse of the ocean current). “The occurrence of this phenomena is highly uncertain, particularly for low temperature scenarios. However, it is much more certain that we are currently entering a new warming period where ecosystems are put under increasing stresses”, said Prof. Josep Peñuelas from CREAF-CSIC Barcelona.

The meeting took place in Oxford on September 12th, 2017 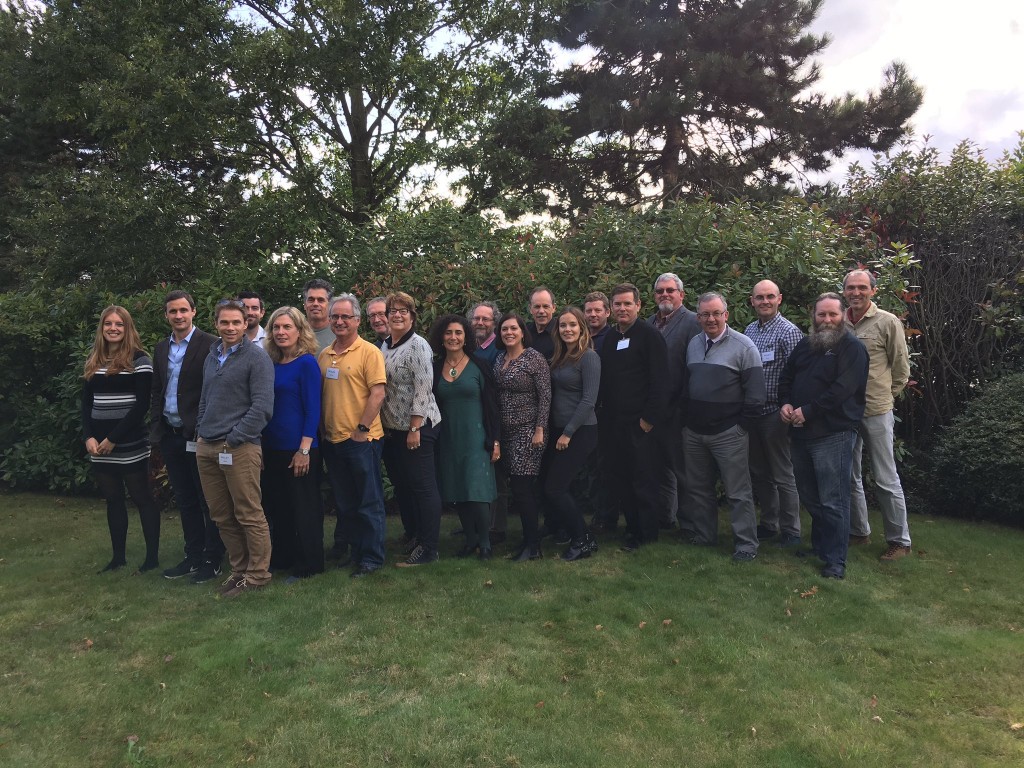